Here He speaketh not of faith only, but of a pure life. Above He said, “shall have everlasting life,” but here, “shall not see death.” (cf. Jn 6:40). At the same time He hinteth to them that they could do nothing against Him, for if the man that should keep His saying should not die, much less should He Himself. At least they understood it so, and said to Him. And concerning the “death,” He said nothing to them, neither did He reveal or tell them what kind of death He meant, but in the meantime He would have them believe, that He is greater than Abraham, that even by this He may put them to shame.

“Certainly,” He saith, “were I a common man I ought not to die, having done no wrong; but when I speak the truth, and have no sin, am sent from God, and am greater than Abraham, are ye not mad, do ye not labor in vain when ye attempt to kill Me?” What then is their reply? “Now we know that thou hast a devil.” Not so spake the woman of Samaria. She said not to Him, “Thou hast a devil”; but only, “Art thou greater than our father Jacob?” ( Jn 4:12). For these men were insolent and accursed, while she desired to learn; wherefore she doubted and answered with proper moderation, and called Him, “Lord.” For one who promised far greater things, and who was worthy of credit, ought not to have been insulted, but even admired; yet these men said that He had a devil. 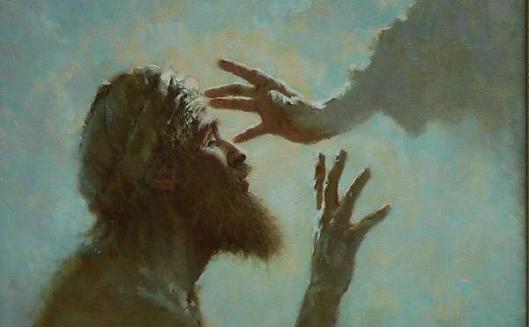 After this, again He fleeth as a man, and concealeth Himself, having laid before them sufficient instruction: and having accomplished His work, He went forth from the Temple, and departed to heal the blind, proving by His actions that He is before Abraham. But perhaps some one will say,“Why did He not paralyze their strength? So they would have believed.” He healed the paralytic, yet they believed not; nay, He wrought ten thousand wonders; at the very Passion He cast them to the ground, and darkened their eyes, yet they believed not; and how would they have believed if He had paralyzed their strength?

Now if there be any comfort for those who mourn over the woes of others, much more for those who rejoice at the honors of others. He charged the Moabites with having exulted over the Israelites, yet it was God that punished them; but not even when He punisheth will He have us rejoice over those that are punished. For it is not His wish to punish them. Now if we must condole with those who are punished, much more must we avoid envying. those who are honored. Thus, for example, Corah and Dathan perished with their company, making those whom they envied brighter, and giving themselves up to punishment.

For a venomous beast is envy, an unclean beast, a deliberate vice which admits not of pardon, a wickedness stripped of excuse, the cause and mother of all evils. Wherefore let us pluck it up by the roots, that we may be freed from evil here, and may obtain blessings hereafter; through the grace and loving-kindness of our Lord Jesus Christ, by whom and with whom, to the Father and the Holy Ghost, be glory now and ever and world without end. Amen.

The above is an excerpt from St John Chrysostom’s 55th Homily on the Gospel of John.